We had planned a visit to catch up with Shadz on the Saturday 21st but discovered there was a Hot Rod and Bike display happening at in Tauranga on Sunday 22nd in a car park so decided it was well worth postponing the ride a day.

We headed out the quickest way out of Hamilton through Cambridge and down the Hinuera plans.

Whilst parked on the side of the road considering Rays badly missing T140 Robin B (Harley) arrived to join us.

At the bottom of the Kaimai’s we caught up with Peter & Sue (51 Thunderbird) and Peter (Hinckley Bonnie). Rob tinkled with Rays carbs and had the bike running a bit better and we’re all off.

Over the Kaimai’s, gas at Tauriko and down the road to meet Neville (Hinckley Sprint), his partner Jo (Hinckley Adventurer) and Chas and his wife in the ute (hmm didn’t look like rain to me).

Into town to the show which was four floors of a car park building full of Hot Rods, parts and a few motorcycles. It was a good hour or more viewing all the treasures with Rob buying an axe (yes a good purchase but will it fit in the saddle bags?).

We spotted one of our members at the show, Dazza from Rotorua had ridden his Moto Guzzi over.

When outside just before we were to leave Bryan & Sue (Hinckley Thunderbird) turned up to join us for the ride out to the Shadbolt’s.

We arrived at the Shadbolt’s in Papamoa a little latter than expected, no idea why really as we more or less went straight there (more or less anyway). Geoff and Judi were present along with Brian & Jocelyn.

Geoff ordered in fish and chips, hot soup was on the table and some cold ones were in the chilli bin. What a great lunch.

It was a good catch up with Shadz over lunch, some watched a reply of the Isle of Mann TT other mucked about outside in the sun.

The photographic evidence was sort as we all lined up on the balcony, then it was time to gear up. 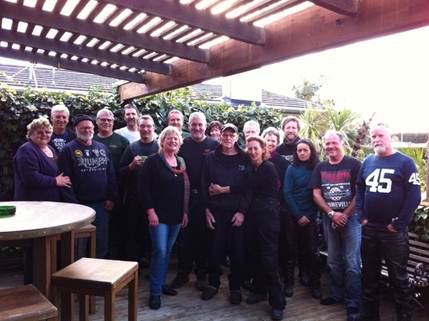 The plan had to change a bit and the bulk of the group decided to head home via the quickest route being back over the Kaimai’s (sorry Pete & Sue).

Trev on the smallest bike took the lead and set a great pace home.

No fog on the Kaimai’s this time so it was a bit warmer and the rest of the ride home was pretty uneventful.

It was a great day out on the bikes and as always it was great to catch up the Papamoa contingent especially our mate Shadz.

Thanks guys for the lunch and Jo for the carrot cake which was well worth a special mention.

Thanks to everyone who joined us for the ride it was a good sized group and ride over, Jocelyn said it really gave Shadz a lift so that is awesome.

Hi guys I have a 94 tiger triple for sale rego on hold it would suit a mechanica[...] Read more »